skip to main | skip to sidebar

Soups of the World - Paris

Paris. Home of cuisine, and perhaps even the ancestral home of soup. The French have many names for soup of course-potage, veloute, bisque, bouillon, consomme.

A lunch at the famous Angelina's, on Rue de Rivoli right across from the beautiful Tuileries garden. I wouldn't normally order a tomato gazpacho, but it really was very hot most of the time we were in Paris, and it really suited the day. I liked the hidden avocado layer at the bottom too, that was a bonus. Plus I wasn't that hungry, was looking for a light lunch, that would allow the de-rigeur verre de rose that ladies who lunch must have, and still allow room for dessert. Parfait. 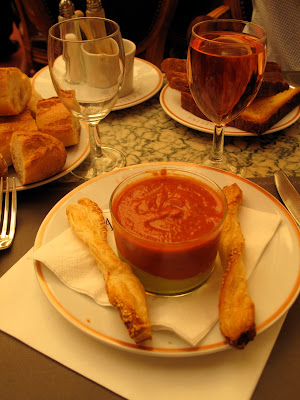 Another wonderful lunch, indeed this was the best lunch of the trip- my birthday lunch at Le Jules Verne on the second level of Le Tour Eiffel. And what a magnificent occasion it was too. Unsurpassed views during lunch, our window edge table was perfectly situated overlooking the Seine, looking toward the Trocadero. I could also see eastwards to where the Statue of Liberty holds her flame aloft in the Parisian sky. Our amuse bouche was a little serving of a tomato soup. Again two tone, with a green layer on the bottom, which seemed more zucchini (although probably strictly speaking courgette here, rather than zucchini), and there were crunchy chunks of raw vegies drifting in the tomato layer. Is this soup particularly common in France, or was it totally coincidence to have two versions within a few days of each other, was one copying the other? 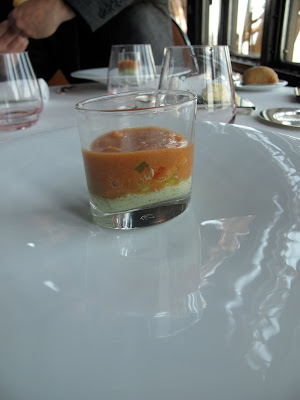 Veloute de crustaces au fumet de champignons et cerfeuil (Shellfish velvety soup with mushrooms and chervil). I'm glad that I hadn't had any experience with the CWA Velvet Soup at this point, and that I was able to languish in this extraordinary soup for my entree (in the Australian sense, ie first course, not main meal) at Le Jules Verne. It was glorious, so much so that I could completely overcome my disdain of foam. The sort of soup that it takes a restaurant staffed with apprentices to turn out. Full, robust shellfish flavour. Home cooks rarely make shellfish stocks which is a pity as they are magnificent. I know I have never made a shellfish stock at home. Indeed I've only ever made a fish stock at home once, and it was at least 10 years ago, but I still remember the extraordinary dish that results from my (rather minimal it must be said) efforts. 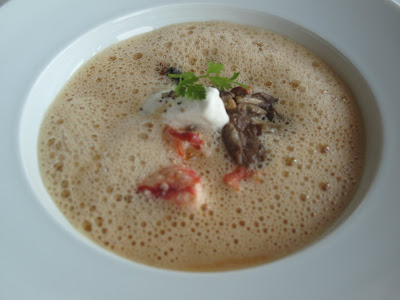 A dinner this time at the world renown Atelier de Joel Robuchon. Sadly the experience as a whole was a bit disappointing, more so for Mr Soup than for me as it turns out. He had been anticipating it more than I had, being a Robuchon fan from way back, and the weight of expectation can be heavy indeed. The execution of every course was perfect, unfortunately a number of them didn't have the flavour impact that should come from a restaurant with such a reputation and background. Our amuse bouche was a carrot soup. I don't think I've ever had a soup with a finer texture, I'd love to know how they did it. But that little bit of soup frippery on the side was Extraordinary. It not only looked beautiful, but also tasted amazing. If you look very hard you can see the strategically placed grains of salt on the far right of the wafer. It really was delicate, nuanced, subtle and like nothing else I'd ever had before. 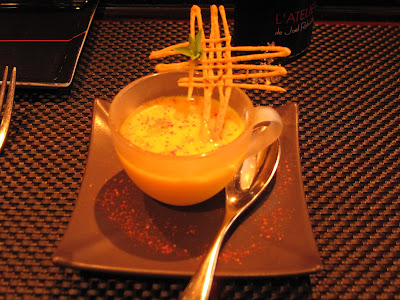 I don't really buy all that many cookbooks any more. I can even (gasp) admit that I possibly have too many. Still I did buy (just) one in France. And of course it was a soup book. I'd been searching in a disorganised way for a while and had nearly given up on finding one that I liked, until I found this one buried on the third floor of Au Printemps near the bizzarely placed icecream counter that they had there. It has some wonderful and intriguingly French sounding soups that I shall make at some time in the future. Soupe Archedoise au chou, chataignes et lardons (Soup from the Archedoise with cabbage, chestnuts and bacon). Lentilles corail au lait de coco et citron vert (Red Lentil Soup with coconut milk and Lime) Soupe froide de courgettes, gingembre et citron confit (Cold Zucchini Soup with Ginger and Preseved Lemon). Strange how they all sound better in the French isn't it? I wonder if I need to try and attack the whole book much like my Delia project? I suspect I might want to try. 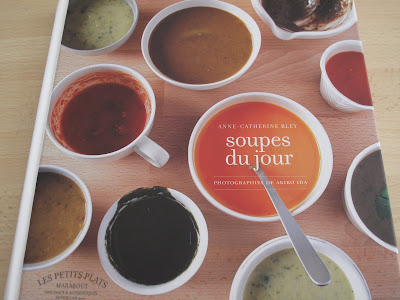 My final Parisian soup was a surprising one, on our very last night in Paris. We had a wonderful meal by the banks of the Seine. The World Cup was in full swing and there was a big game on that night, probably a semi-final, I may know if I had paid any attention- I think it was Germany and Spain, so there was a wonderful atmosphere in the bar behind us. It was certainly Spain and someone. Anyway, after a wonderful entree of smoked salmon blinis (still warm, oooh) washed down with Bolli and then honey duck main with a wonderful red, I spied a strawberry soup on the menu- there was no other choice. It's reasonably rare to come across a fruit soup, at least in Australia, I've had one or two before, and they'd been delicious, so I really couldn't go past this one, and I wasn't disappointed. It was light and refreshing but with a real strawberry taste. It was really quite a big bowl of soup, and I didn't finish it- we did have to fit in a final taste of Berthillon after all. 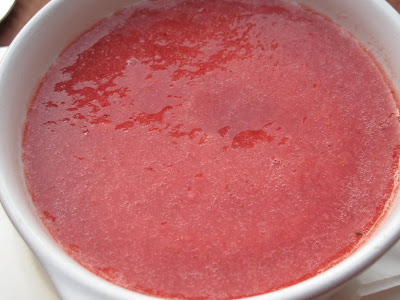 Newer Post Older Post Home
Subscribe to: Post Comments (Atom)
I have a thing about soup. I love soup. Thick, chunky soups. Meaty soups. Vegetable soups. Smooth glorious soups. Chilled soups in the summer. Pretty much whatever you can do with soup I want to make and then eat it. I do however, have a subspecialty interest in pumpkin soup in all it's incarnations.